I read the below article quite a few years ago for the first time.  I keep coming back to it as the simple principles taught by this mother of nine (at least back in 2001) are very unique in our "driven" educational culture.  Not only are the priciples unique, but they happen to be true, simple and very effective! My experiences with my own children and study of the scriptures are my foundation for these judgements.  I wish I had always followed the principles much more closely than I have, but fear and our own background of "traditions" seem to try and root their head, especially when working with a child who is more of a late bloomer as it pertains to "book learning".


Nevertheless, whenever I have applied these principles I end up being completely amazed by the results, especially as time passes on.  Another wonderful reference of support for these principles in Raymond and Dorothy Moore's book, "The Successful Homeschool Family Handbook".  I was required to read this book when I first moved to our current area about 12 years ago upon joining a very large home schooling group called HINTS (Home Educators Need Team Support).  They even have you sign a paper and mail it in within about 30 or days of joining, stating that you finished reading the book!  Wow!  They were very wise to do this as the book is full of tons of legitimate educational research, research that goes very much against how most of us were raised.


I must admit seeing the tremendous success of my oldest two children has recommitted me to reviewing these principles. I've already written in a former post (Peace Which Passeth All Understanding) about some of the successes of my oldest daughter, but most importantly she has a beautiful, strong testimony of the Savior, she is HAPPY and knows she is on track with her life.  She has a strong conviction that she is in the right place and at the right time.  She works on campus at Brigham Young University (Math Dept.) while staying with my wonderful parents and is preparing for her Jr. year there this Fall.  She just loves life! What more could a parent want for their child?


Our second child and oldest son has been blessed beyond his wildest dreams as far as his "career" and "educational" goals.  And he is only seventeen years old!  He was always an "early bloomer" pertaining to academics.  I barely had to doing anything to get him reading and he seemed to surpass me in most general knowledge by the time he was twelve!  He developed an intense passion and love for music and EVERYTHING about music as he grew.  When he was little we always played inspiring music in our home and we would often sing for fun. He took some cello lessons by a very easy going teacher when perhaps around eight years old and then piano at age eleven.  On more than one occasion I would find his piano teacher (a professional performer and wonderful man) tearing up in my living room as he witnessed my son's amazing, rapid progress on the piano.  We did voice lessons a few years later with another wonderful instructor and he stunned us all by landing a lead in our Stake's production of "The Garden" at age fifteen.  He performed so beautifully and with such powerful emotion!  I still tear up as I remember that opening night when my husband and I heard him for the first time.  We had no idea he could sing like that! (I obviously didn't sit in on his voice lessons, though we had actually stopped lessons by then as we had moved out of the city and I felt the time and distance were too much.)  He somehow heard that our local community college had an excellent music program and determined to get his diploma as soon as possible in order to be a full-time student there.  He earned his diploma by age sixteen, completely on his own through independent study, and was able to audition and be accepted into the vocal program for last Fall semester.  He was assigned a vocal coach who is an amazing world-class opera singer and performed in Europe for around ten years.  He also took many classes in music theory, diction, and piano as well government, chemistry, college Algebra, etc. and earned a 4.0 GPA both semesters. The day after he finished finals for second semester we left for our annual LDS homeschool conference where a keynote speaker happened to be Michael Ballam, also a world-class opera singer who had performed in the past with my son's vocal coach of the past year.  When my son approached Dr. Ballam after hearing him speak and told him of the connection, he said he wanted to hear my son sing sometime.  Later that day I happened to be in the room where the grand piano was and got to film this on my iphone (see below)! Michael Ballam met with me later and said that I had an incredibly gifted son (not really news to me :)). But as a result, my son was offered a summer apprenticeship in Dr. Ballam's Opera Company in northern Utah.  He told me that only perhaps one other time in the past nineteen years had he invited someone so young to perform in this professional opera and musical festival. (We had about one week to prepare before sending him off!) That's where my son is now and will be performing in Oliver, South Pacific and Boris Gudunov (a Russian Opera) during the month of July and early August.  He is singing side by side with post-graduate students from music schools like New York's Julliard and working with the best of the best directors, producers, etc. in our nation. Unbelievable!  Not only this, he will be attending Utah State University with a full-ride scholarship as a music major with Michael Ballam as a mentor in the Fall.  What tremendous blessings, experiences and preparations for him before serving his church mission in the Fall of 2012!

Gotta love those bare feet! :-)
I happened to be sitting in this large hall during a break between classes at the LDSEHE conference in Virginia Beach when I saw Brooks walking down the isle with Michael Ballam, our keynote speaker that morning. I said, “Oh good, I’m glad you two have met each other,” and Brooks said, “This is my mom.” Dr. Ballam took out his cell phone and took a quick picture of us together and then off they quickly continued to the front of the room.  When I realized what was happening I remembered I have an iphone (yea!) and went up to the front row to film.
Earlier in the school year Brooks’ vocal coach, Rebecca Cook-Carter, upon learning he was a Latter-Day Saint, asked if Michael Ballam taught at BYU.  Brooks had no idea at that time who Michael Ballam was! Knowing of this connection Brooks approached Dr. Ballam after he spoke and told him who his vocal coach was and that he was a music major.  He replied that he knew her, (Rebecca) and that he would like to hear him sing.  Later in the day after Dr. Ballam spoke to just the youth, Brooks went up to him again and said, “So when do you want to hear me sing?” and was told, “Right now.” You can see part of that experience above in the video clips! Brooks says he wasn't warmed up so not his very best, but I love it. Michael Ballam later told him one of things that was so amazing was how Brooks hit the notes perfectly in spite of how he played the piano (no music and also distracted listening to Brooks I assume. :)


What currently stands out to me about the Crowder's experience below is how they were obviously busy with their own lives while their son was gaining all this knowledge!  She was having babies (eight to be exact), raising toddlers and most certainly working to teach and train her children to work around the house, cooking, shopping, doing church callings, etc.  While she helped her children the best she could when they requested it and read to them daily, her life didn't revolve around them, but on Christ and service to Him.   What a beautiful and inspiring example of a "Christ-centered" home (verses "child" or "parent" centered).

(Another great book to check out is "An Agency Approach to Education" by Neil Flinders, a BYU education professor. I read this when my oldest child was five years old.) 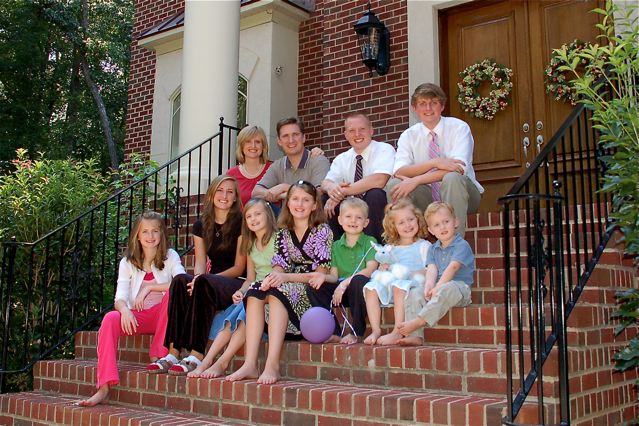 I heard the below commentary on "Music and the Spoken Word" today and it made me cry.  Of course, the pictures and music they play also help. :)


"From time to time we hear great artists or athletes described as 'Renaissance Men'. Society marvels at the variety of their accomplishments. A football player who also excels as a musician or a writer who can also paint. We admire people who can 'switch hats' and shine in more than one arena, but in our quest to find the next celebrity multi-tasker we often overlook countless renaissance men who are closer to home.


The real treasures of our society are the dad's who where multiple hats every day of their lives, even when they're are tired after a long day at work.

Our world is made better by these kinds of men, men who can work a jack-hammer one minute and caress a baby the next. Men who can split a log, yet mend a heart. Men who can be tenacious at the office in the morning yet be found teetering on a tiny chair and sipping from a tiny cup at their young daughter's teddy bear tea party that evening.

Great father's listen, guide, love and laugh, forging a sacred bond with their children that will last for generations.

Such men put family first and understand that their role extends far beyond providing. In the process they show their families what it means to be a real man.

No one can fill this heroic role quite like a loving father. If you ask them how they do it they'll simply say they're 'average guys with average lives', but in the eyes of their children they are heroes.

Men who can stand as strong as mighty oaks yet share a gentle breeze and the squeeze of a little hand. These are the real Renaissance men and they are all around us: Father's whose children matter most of all."