Life is Precious! The Missing Link in our Home-Education: Community Service


Joy is the reason we committed to begin down this new path as a family.  But the education has been profound as well.


I met Lisa Metzger this past September at our children's homeschool Fun & Fitness class on the first day. The director introduced us when she learned I have ten children as she knew Lisa has nine--three adopted, six by birth, and seven in heaven (miscarriages).  But I quickly realized Lisa wasn't just another homeschool mom of a large family.  There was something very unique about her, and not just the fact she and her husband have opened their hearts and home to all the children our Heavenly Father will send them.  As we visited with each other I could actually feel the joy and peace coming from her heart.  I also noticed the bright countenances of her children. It took me several weeks to find out about the community service they've given for over two years, but when I finally did there was no doubt in my mind that it was a big part of their secret.


Well, you guessed it:  For about the past month my family has been going with her family to the busiest abortion mill in town for a few hours each week. So far we have mostly just been learning from and observing their great courage to stand for truth and righteousness in the face of evil.  (Two other families are often there with us also.)  The first time Alisha went she told me she had never seen such a dramatic contrast between good and evil before. It is quite simply an amazing thing to witness.  Another daughter said going there has made her realize her own challenges are really quite small and insignificant. These are very valuable lessons, don't you think?

The following is my journal entry for this week:

We learn so much from our experiences at the abortion mill.  It's amazing how going there has brought the scriptures more to life for us!

It was interesting, again, to see some of the male partners very anxiously waiting out front, nervously smoking their cigarettes. It's actually a very, very common scene there. I had never thought that abortion affected men too much, but if you think about it, those father's will also have to live the rest of their lives knowing one of their offspring doesn't walk the earth because of their "choice". So heartbreaking! Yesterday one of the partners was extra tense and disturbed (also common!) and came out to his car, popped his trunk and took at least 5 min. to hook up some bass speakers he had back there and started blasting very loud music with his sophisticated sound system at us.  Lisa was on the mic, and apparently said something that hit a tender spot as you could clearly see the pain and discomfort in his face and body language.  This surprised me a bit because she is a master at "speaking the truth in love" out on the sidewalk and is never harsh in tone. The hired security guards in the parking lot usually play loud rap music from their cars, but it was a cold and rainy day so the one there today (usually two) just sat in his car with the windows rolled up, but joined in with this one father for a few minutes, blasting music together. :))  The guards will also beep their horn repeatedly if a car stops and rolls down their window to talk to a sidewalk counselor to make it difficult for them to hear.  So isn't it eye opening how the "natural man/woman" will do whatever they can to muffle the truth speaking to their conscience (or to others)!?

Which reminds me, a car that did stop yesterday on their way in told Kaitlyn (Lisa's 12 year old daughter who was handing her a booklet with pictures of unborn babies at each stage) that she knew God was a forgiving God and that he would forgive her for doing this.  This is actually a very common line that we get from people since more than 80% fill in the required religion question on the paper work at the abortion clinic as "born-again Christian".  But then I heard Lisa on the mic teaching that the scriptures plainly state the consequences for rebelling against God with a full knowledge:  "I will hide mine eyes from you: yea, when ye make many prayers, I will not hear: your hands are full of  blood." see Isaiah 1:15-17   Another very applicable verse I've heard there:  "I will not hear them in the time that they cry unto me for their trouble." Jeremiah 11:14

We are not allowed to step foot on the clinic's property, but when people get out of their cars near the sidewalk where we can stand, we call out, "Can we help you?" or  "You don't need to do this.", etc.  We called out to three young women getting out of a car near us and one of the girls said, "I'm not here for an abortion!" She was with her friend whom we later learned didn't want any permanent connection with the father of the baby. He had said if she kept the baby he wanted to be together to raise the child.

Anyway, a while later this same friend came out of the clinic down to Lisa (who was on the mic) and said she didn't believe in abortion and wanted to help her friend. Lisa asked how far along she was and then showed a picture AND had her son pull out a little model of a 12 week old baby to take into the clinic to show her friend.  She also told her not to let them take her back and do the ultrasound as they would still charge her a large amount even if she didn't have the abortion. Back in this dear friend went.

Lisa had us all gather together and pray for the girls, which prayer my Andrew, 3 yrs., cut short after tripping and falling with an umbrella!! :-)  Thank Heaven,  a little while later the other friend came out and said their friend would like to have the free ultrasound at the Pregnancy Resource Center if Lisa would show them how to get there and go with them.  Lisa had told the first friend who had come out this free service was available and only four miles away.  Lisa said "yes" and out came all three of these young women from "the gates of hell", as Flip would say.  Yea!!! We learned that when she held and saw the model of the little 12 week baby she said "I can't do this." We also learned these young women were impressed by the fact that people were on the sidewalk with their young children on such a rainy, cold day! (All things work together for our good!) Sadly, they also said that people inside the clinic were "celebrating abortion".

And after seeing the ultrasound with a live, active little baby, she KNEW she couldn't do it and is seriously considering adoption.  So few of the mothers will do this as they somehow usually believe they are not "being responsible" for themselves if they give the baby to someone else to raise! Hard to understand...So many lives are blessed through adoption!

While Lisa was gone, Flip got on the mic. Thank goodness he had arrived maybe 30 minutes or so before. Flip is a protestant pastor who has been super involved with pro-life work for nearly 30 years.  He played a very large role in converting Norma McCorvy (the "Roe" in Roe vs. Wade!) to Christianity and bringing her over to the Pro-life side back around 1994.  Norma wrote an excellent book called "Won by Love" and tells all about her story and how Flip rented an office for his pro-life organization (Operation Rescue) next door to the abortion clinic where she worked.  I've just started reading it, but it is fascinating! Won by Love 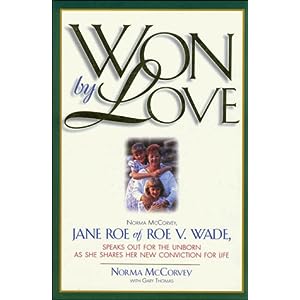 SO, it was just Flip, Kaitlyn, me and my children (minus Alisha) left on the sidewalk when another woman walked out of the clinic and came down to the microphone where Flip had been speaking.  I was on my phone telling Alisha about the first "save" when I saw her coming so I walked over to them also as I know it can help to have another woman there.  Prior to this Flip was doing great on the mic talking about how you don't know what this child could become some day...a doctor, a teacher, maybe even the President of the United States? That the child wouldn't be there to support them in their old age if they did this thing, etc., etc.  It was all great and spoken with tenderness.

So she came down and said, "I don't want to do this."  He then asked the woman if she had other children and she answered "two". Then he asked if she had previous abortions and she said "no". (Repeat abortions are very common!) I then put my arm around her and all these big, beautiful tears began to instantly stream down her cheeks and onto her chest.  Oh, what a wonderful thing to see: a broken heart and contrite spirit at that place! (You see so much of arrogance and selfishness as well as devastation and sadness after the abortion.)  I told her I had ten children and that my friend, Lisa, had nine and that we would support her however we could, even if it's just to pray for her.  I also told her about how people supply a two-year supply baby shower. I asked her name and Kaitlyn had a pencil ready and asked her to spell it! Go Kaitlyn!! (It was a very tricky name.)  I showed her Lisa's name and cell number in the booklet and told her to call or text her.

In the meantime the the "father of the child" had pulled up near us in the car and was yelling that she shouldn't talk to us and that we should pay him the $300 (that's about how much an abortion costs, so he must have already given the money or something. The clinic is required to give it all back, but maybe he didn't know?)  You could see she was unhappy with him and Flip told her she needed to get away from him.  She nodded and resolutely said, "Yes, I do." She also asked Flip if he had a business card as I'm sure she greatly desires fatherly, spiritual leadership in her life.  It's truly what most, if not all, of those women so desperately need, not to mention unconditional love!

Anyway, that is a bit of our amazing day!

"And if it so be that you should labor all your days in crying repentance unto this people, and bring, save it be one soul unto me, how great shall be your joy with him in the kingdom of my Father!"
(Doctrine and Covenants 18:15)

[The day, however, didn't start off great as the sights below are what we saw upon first arriving at the mill. Lisa got these amazing and sad pictures. They tell much of the heart-breaking, cold, dark reality of abortion:]